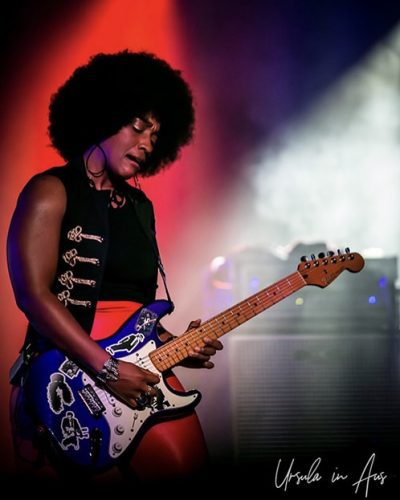 Melody Angel (her real name) is the complete package: gifted guitarist and multi-instrumentalist, songwriter, vocalist, arranger, and producer. Along the way Angel found time to launch a successful theater and film acting career and received international acclaim at the Cannes Film Festival in France. The Chicago Reader newspaper called her “The Future of the Blues.” The Southside Chicago artist is indeed navigating a forward-looking musical path while integrating the legacy of classic blues.

Her music encompasses many 20th century American genres, including Rhythm & Blues, Rock, Folk, and Funk, all layered on a strong bed of Chicago blues.

Angel’s music is her own. She imbibes the blues but through the prism of her own creative forces. She gets that trait honestly as a relative of Chicago blues icon, Otis Rush. Rush, along with Magic Sam and Jimmy Dawkins, helped create the fabled “West Side Sound” in the later 1950s — a sound that heralded a new and innovative blues that embraced R&B and jazz and often incorporated horns.

When Angel started playing guitar at age 15, her mother Stephanie shared about cousin Otis. As a child her mother, who is a gifted singer in her own right, enjoyed sleepovers with the Rush children at their home. She recalls Otis jamming in the living room with other blues icons like Muddy Waters, Willie Dixon, and Howlin’ Wolf. She was excited about learning of her famous relative. “I wanted to see him then, but his health wasn’t good. My mom said we would go see him when he felt better, but it never happened.”

She laments, “I looked him up on YouTube and could not believe the old man I knew growing up was the Otis Rush! I never got a chance to talk to him about it and tell him I was trying to play the blues too. I think he would have got a kick out of that.”

Other family members are also gifted musicians. Her mother performed commercial jingles when Angel was young and also did musical theater. “My auntie Tanya, my grandma Yvonne, my great auntie Deb who played the piano, and great auntie Brunetta, all sing gospel songs and soul music,” Angel proudly shares. “Being around amazing singers my whole life always pushed me as a vocalist. I feel I’m always striving to be as good as them.”

Angel started her first band, Melody Angel and the Message, while in high school. “They were the only people I knew who were into the blues and old school rock. That’s when I started getting into Big Mama Thornton, Junior Wells, and B.B. King.”

She counts several influential guitarists who have impacted her music. They include, in order of importance, Prince, Jimi Hendrix, Slash, Santana, Chuck Berry, and Sister Rosetta Tharpe.

Prince had an oversize effect on Angel after she viewed the “old movie” Purple Rain when she was seven. She remembers, “He made the most incredible sounds come out of that guitar, and from that moment on, I wanted to do the same. From age 7 to 15, I begged my mother for a guitar I knew we couldn’t afford. Then one day out of the blue, my mom brought home a purple Fender Stratocaster. The day I got that guitar was the best day of my life and it is still the main guitar I play to this day.”

If you are a Chicago blues artist, the Chicago Blues Festival is a musical goal. For Angel, after several tries over her young career, the fateful year was 2016, and she was booked on the big Pepsi Stage. “That was the first big festival I had ever played. I was so excited I didn’t sleep the night before.” Her inaugural festival appearance was a rousing success, and the line to purchase her CDs after the show extended “as far as the eye could see,” Angel fondly recalls. “The love those people showed me that day made all the years of trying to play there worth it.” Angel has been attending the Chicago Blues Festival since “I was in a stroller.” From that first 2016 appearance, she has played the festival every year, except 2020, when it was cancelled due to the Covid pandemic.

The Chicago Blues Festival appearance was helped by the popularity of her regular Thursday night gig at the famous Chicago blues emporium, Rosa’s Lounge, on the Near Northside. She landed the time slot the previous year. The Rosa’s Lounge gig was prompted by her mother, who is also her manager. She sent a YouTube video of Angel doing a cover of Big Momma Thornton’s “Ball and Chain” to Tony Mangiullo, the club owner. She was invited in to play the song at the club’s blues jam and was offered the Thursday evening slot the same night. Also, at the club that evening was Lil Ed Williams, who has become a strong supporter. “Rosa’s will always be home base for me.”

Angel plays other Windy City venues, always to notable praise. An appearance at Buddy Guy’s Legends set the social media world buzzing, and a fan sent her YouTube video, “In This America,” to the founder of the Byron Bay BluesFest, Peter Noble. The festival is one of the largest in the world, drawing more than 100,000 attendees over a five-day period to the New South Wales area on the east coast of Australia. “Noble saw the video and immediately sent me an email asking if I would play four shows at his five-day festival. I thought it was a joke email at first, But I looked him up and realized it was real. I cried tears of pure joy.”

The event introduced Angel to an appreciative international audience and put her on the same stage as the other festival performers, including her guitar hero, Carlos Santana, and also Buddy Guy, Bonnie Raitt, Neil Young, Beth Hart, and Mary J. Blige.

“The area around the festival was the most beautiful place I ever saw. It was peaceful and I was treated well by everyone I encountered. The people in town did look at me strangely. I don’t think they were used to seeing a black woman with a big afro walking around. It was funny.”

Since her appearance at that Australian Festival, Angel has enjoyed performing at the Life Ball Festival in Vienna, Austria, and the Wespelaar Blues Festival in Belgium. She enjoys the overseas forays but is still thrilled to perform close to home at Chicago area musical events like the Edgewater Blues Festival, Hyde Park Fest, and the Taste of Chicago.

Angel has been busy recording some excellent and well-produced music. Her two EPs include the topical and haunting, “In This America,” and the ground-breaking “A Woman’s Blues.” Her 2019 Angel & Melodies is a joyful romp into rockin’ blues and R&B with a skilled visit to the land of post-funk rock. The stellar 2017 In The Fire is one of the best blues/roots recordings of that year. The recording includes expeditions into beautiful poetic folk, classic blues, and eclectic soul. She worked on the project with former George Benson drummer, Khari Parker, who died suddenly in 2020. “He was one of the best musicians I ever met. He taught me so much in those recording sessions about trusting my instincts and how powerful keeping things simple can be. His encouragement meant so much to me, and I use what he taught me every time I create a new song.”

Angel obviously learned well from that encounter because her brand-new March 2021 recording, She Black, is a tapestry of complexity in its simplicity. The production is again excellent, with great song writing. The recording evokes a sense of joyful dancing with the song, “Get Over Yourself.” “I Let You Lie” is one of the many standouts, and the biographical “1621 Downs Street” speaks to the universal drive for achievement and the all-too-often disappointment of what sometimes awaits one when they arrive. The title tune, “She Black,” beautifully reframes a societal challenge with gripping tone- colors and clarity.

On the new recording, Angel pays homage to her relative, Otis Rush. “I give him a little tribute. The opening lick is his lick from “Double Trouble.” The thirteen songs on the disc all capture the listener from beginning to end.

Like many of us, Angel’s life and earning opportunities were upended in 2020 by the Covid pandemic. “Lucky for me I spent most of the year working on my 3rd album, She Black. This album saved my life and my sanity. I have never been prouder of a project. On this album, the truth I shared in the lyrics really healed me. Music is a powerful gift and I’m grateful for it.”

On where she sees the direction of the blues, Angel is both optimistic and ready to embrace the future.  “I always have hope that the blues will live on. The blues is what all great American musical genres are made from after all. Everything starts with the blues.