This concert has already happened. You might want to check out our upcoming shows.

The roots of calypso music run back to the West African Kaiso and canboulay music of the Africans brought as slaves to work sugar plantations in the 17th century. Over these rhythms, they would sing in French Creole, mocking their “masters” and communicating with each other and calypso has been pushing the boundaries of free speech with lyrics about island life ever since.

“Trinis” have long considered calypso their most reliable news source and still do. Sex, scandal, gossip, innuendo, politics, corruption and local news will all be put to a beat, and the more clever and dance-able a group is, the greater it’s reputation will be.

The front man – or woman – is known as a calypsonian. They’re expected to hit the mic with a certain bravado and to lyricise impromptu, commenting socially or insulting other calypsonians, “sans humanité” or “no mercy”. Those familiar with hip hop culture will recognize these skills as “free-styling” and “battling”.

Drew Gonsalves was born in a small town in Trinidad and grew up just down the road from Lord Kitchener, one of the famous calypso stars. When he was 13, his parents separated and his mother returned to her native Quebec with Drew and his siblings. It was a difficult time for him, with culture shock and homesickness compounding the usual feelings of alienation that come with adolescence.

He started writing angry poems and songs, forming a band with some friends including Kobo Town drummer Robert Milicevic. He became passionately interested in West Indian history and he went ìback homeî every chance he could, seeing Trinidad through new eyes and hearing master calypsonians with new ears. 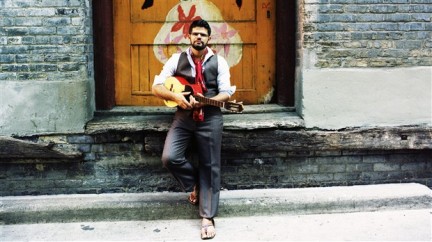 Given his history, and the background of these musicians, it should come as no surprise that while their music is centered in calypso, it also draws on Jamaican dub, reggae, rapso, zouk and hip hop. It’s lively, outspoken and fun- just the thing for a sunny festival afternoon!